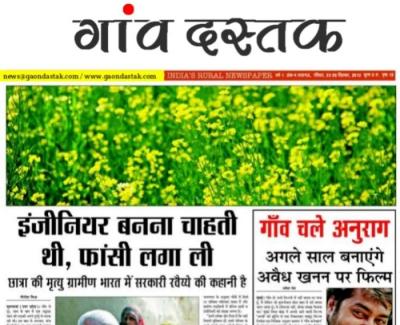 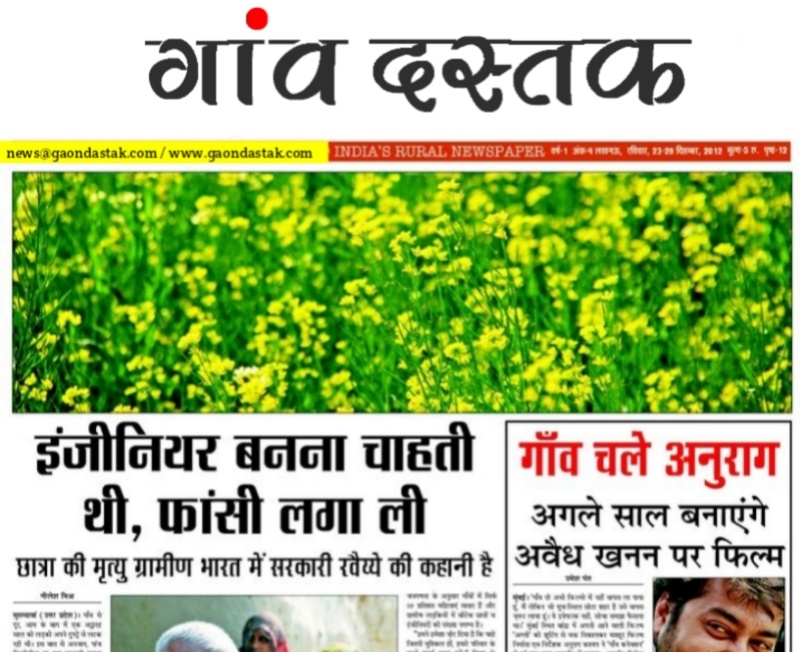 We live in an age where there is an information overload. At the click of a mouse relevant and sometimes irrelevant information is available to us. Things are, however, very different in rural India. There are places that have not seen or felt the power of information technology and even mainstream media has bypassed them. Regional and national newspapers generally carry news items that have little or no relevance in rural India. Gaon Dastak (www.gaondastak.com) plans to change that by being the country's first professionally run rural newspaper.

The desire to expand the influence of this effort led to the creation of Gaon Dastak. Mahendra Kudia is now associated with Gaon Dastak as a digital editor.

The idea behind Gaon Dastak is to fulfill a gap in content that exists when it comes to rural India. "Mainstream newspapers devote only two percent of its space.

to stories about rural India. I strongly felt that there was a need for a professionally run rural newspaper which impartially fills this gap. Gaon Dastak is our attempt to do so," says Mahendra Kudiya, Editor of the Digital Media Gaon Dastak newspaper. Gaon Dastak aims to become a bridge of information between rural India and urban India, by providing a passageway of content to both sides of the divide.

"In the first five months of its operation, Gaon Dastak has been able to establish a strong brand, reader connect and distribution verticals, and we will now move towards escalating circulation and deepening our reach. Our focus area currently is Uttar Pradesh and on the next three months, we will start circulating in Mumbai," says Mahendra. According to him, the target group in Mumbai would be the auto and taxi drivers from north India. The paper subsequently plans to move to other states, starting with Bihar.

An editor, Mahendra started his career as a small reporter, now editor of Village Dastak.

Currently published out of Raibareilly, the newspaper prints 10,000 copies and is distributed in 38 out of UP's 75 districts. One copy of the paper is read by an average of 10 readers, and the paper already has a readership of more than 1,00,000, Mahendra claims.

Its working model is fairly simple, where news is collected by a network of reporters based in Raibareilly and stringers in different areas of India. The distribution model is centered on a series of 'Dastak Centers' in different districts where representatives pick up copies of the paper from various trains that operate out of Raibareilly.

The entire investment in the newspaper so far has come in the form of private funding by the founder. Mahendra says conversations have now started with investors to raise funding to be able to expand across different states. "We are also about to launch India's first audio newspaper and a TV show and funding is crucial to carry forward this growth plan," he says.

With a headcount of 15 as of now, the paper makes limited revenues from subscriptions but going forward, the revenue model will entirely be advertisement based.

"Our biggest challenges are funding and deepening distribution. UP is the biggest, but also the toughest market, and we are trying to find innovative ways to reach out to the population which is currently un-served by newspapers," says Mahendra.